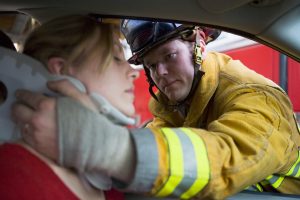 Victims of truck or motorcycle accidents may be eligible for significant compensation. These accidents are often very serious, necessitating long-term medical care.

If you have been injured in a trucking accident or motorcycle accident, don’t wait to talk to an San Bernardino truck accident attorney. Schedule a free consultation by calling Kampf, Schiavone & Associates in San Bernardino at 866-583-8796.

An Overview of Truck Accidents in San Bernardino

Accidents involving large semitrucks or commercial trucks often end catastrophically for the driver of the smaller vehicle. Injuries can be very serious, often necessitating a lifetime of medical care.

Our attorneys represent individuals who have been injured in trucking accidents caused by:

Trucking companies often send their own investigators to the scene of an accident. For this reason, it is important to contact a personal injury attorney as soon as you are able. Our attorneys can offer advice and take prompt action on your behalf.

Contingency fees: You don’t have to worry about the cost of hiring an attorney: We get paid when you get paid.

Can I Sue for Being Hit by a Semi-Truck?

Yes, it is possible for truck accident victims to file a claim against the truck driver or other liable party.

In some instances, even if you file a claim, you might not be suing the truck’s driver at all. For example, if the accident resulted from a faulty truck part, the liable party could any number of individuals or organizations. These could include the vehicle’s manufacturers, vehicle parts’ manufacturers, whoever was in charge of maintaining and performing repairs on the truck, or a combination of these.

Even if the truck’s driver was behaving negligently on the road and deemed liable for the crash, they still might not be the only liable party. It is normal for their employer to be given partial responsibility for the accident, as well. This means that the victim will be collecting damages from both of these parties.

How Do You Determine Liability After a Truck Accident?

As with any other type of personal injury claim, for you to succeed at collecting damages, you will need to prove that the opposing party was acting negligently. If one or more parties were displaying negligence, they will be considered liable for the crash. Alternatively, if you cannot prove that the truck’s driver, manufacturer, or other party was liable, you will not receive compensation for your losses.

If any party involved in the accident failed to execute reasonable care, then they were acting negligently. In cases where the truck’s driver was at fault, this could mean that they were failing to abide by traffic lights or signage, trailing too close, driving under the influence of drugs or alcohol, or another act that fails to uphold their duty of care.

If you can successfully prove the duty of care existed, that one or more parties breached it, and that it was this breach that led to the accident (and subsequently your injuries), then you can prove liability during a truck accident claim.

What Is Pure Comparative Negligence in CA?

During California personal injury claims, a pure comparative negligence system is used to determine the amount of damages any given party receives.

This means that the accident victim can be deemed partially liable for the crash, depending on whether they were acting negligently. Based on how liable each party is determined to be, their compensation will be reduced by an amount equal to their own percentage of fault.

For example, if the accident victim experienced $100,000 in damages due to the crash, but they are also determined to be 75% liable, the maximum amount of damages they can recover will be reduced to $75,000. Further, the party that was mostly at fault for the accident cannot bring a claim against another party.

Why Should You Get an Attorney After a Truck Accident?

If you were injured in a truck accident, it is important to hire an attorney as soon as possible.

The losses someone receives after a truck accident are often severe, and as such, it is crucial that they are adequately compensated for all of those damages. However, if you attempt to represent yourself, it can be difficult to prove that you are worthy of the damages you are actually owed. This is true whether you are in a court setting or negotiating with insurance providers.

Those without legal experience often struggle to communicate with insurance providers following an accident. This is because an insurance company’s priority is profit rather than ensuring justice after a serious accident. If you don’t know how to speak to these companies, it is easy to make a statement that will be misconstrued as an admission of partial or total fault. Such a mistake could either reduce the settlement you are eligible to collect or make you unable to receive a settlement at all.

Additionally, if your CA truck accident claim is taken to court, it can be difficult for those without personal injury experience to prove the other party’s liability. Your truck accident attorney understands exactly what the judge is looking for to determine who was liable for the crash. Your lawyer will also perform a thorough investigation of the incident, ensuring that they collect any available evidence that proves the other party’s fault.

What Should I Do If I Was in a Truck Accident?

After getting into a California truck accident, there are some valuable next steps to keep in mind. How closely you follow these steps could impact your success with your personal injury claim and the amount of damages youcan collect.

If you were in a truck accident, remember to:

Getting timely medical care can benefit your claim, on top of being essential for your own well-being. Nevertheless, in some severe truck accident cases where the victim sustains serious or catastrophic injuries, it may not be possible to abide by the routine. Remember to prioritize getting medical care and treatment above anything else in these instances.

What Damages Can I Receive in a CA Truck Accident Claim?

After you and your attorney have successfully proven that the other party was liable for the truck crash, you will be able to collect damages. The purpose of these damages is to cover any of the losses you suffered due to the accident. However, damages do not come in just one form, and there are several key types of injury claim damages.

Some damages will be economic, while others will be noneconomic. Economic damages are based on the financial losses you incurred due to the truck crash, including medical expenses and property damage. Generally, it will be possible to prove these damages in court through displaying bills and other forms of documentation. It is generally a more straightforward process to prove economic damages to a judge rather than noneconomic damages.

Rather than deriving from your financial losses, noneconomic damages are due to losses without a definitive price tag on them. For instance, this often relates to pain and suffering. When a truck accident victim receives damages for pain and suffering, they are being compensated for the negative toll that the accident had on their daily quality of life. This could account for the psychological ramifications of the crash, although it can also consider the physical pain that the individual has experienced.

Some of the most common kinds of damages collected during a CA truck accident claim are:

How Do California Accident Attorneys Work?

Once you have hired a California accident attorney, they will get to work on a wide array of different tasks, all with the end goal of getting you the compensation you are owed. Typically, these duties are as follows:

What Percentage Do Truck Accident Lawyers Get in CA?

Personal injury lawyers in California work on a contingency fee basis. This means that unless their client is able to collect damages for their claim, the attorney will not be compensated.

On average, San Bernardino truck accident lawyers will collect somewhere between 33% and 40% in contingency fees from their clients.

Using the contingency fee system, clients are not required to pay any money upfront or out of their own pocket. The attorney’s payment will come purely from the winnings their client receives.

If you were seriously injured in an Inland Empire California truck accident, your next step after receiving medical care is to get in contact with a personal injury attorney. Since our founding in 1985, the experienced legal team at Kampf, Schiavone & Associates has been devoted to defending the rights of injured Californians in the San Diego and San Bernardino area. We have recovered over $250 million through verdicts and settlements.

Not only do we work with victims of auto accidents or other personal injury related accidents, but Kampf, Schiavone & Associates also defends those injured in cases of medical malpractice and workplace incidents.

To learn more about the verdicts and settlements we have reached, simply take a look at our website. Or, you can also view several testimonials from past clients.

It Costs Nothing To Talk To An Attorney: Contact Us Today

After a truck or motorcycle accident, you deserve to learn about your legal options. Call our office at 866-583-8796 or complete our online contact form to set up a consultation.